On 2 months Ago
admin

Could a Sydney Swans dynasty be ahead of us?

However, they will have a few more premiership cups in their glassware cabinets once this decade is up.

They do need to find a way of managing their budding superstars. Under-20s Chad Warner, Errol Gulden and Braeden Campbell all required games out mid-season due to stress reactions.

Their workload was heavy early, but it did equate to success on the field – they have since not looked like dropping out of the top eight.

The next tier of youngsters, in their early 20s, are exciting: James Rowbottom, Oliver Florent and Will Hayward. It would be remiss of me not to mention the burgeoning cult hero, the ‘Amartey Party’, Joel Amartey.

Sydney’s list is very well age-proportioned. In their mid-20s, we are looking at players such as Tom Papley, Isaac Heeney and Callum Mills. They are all significant factors in success, as long as they bring consistency.

A premiership team also requires the twilight tier. Josh Kennedy will play throughout 2022 on his one-year contract extension, then it may be curtains for the 34-year-old.

Lance Franklin, well, who knows. But his role in developing 19-year-old and number four draft pick from last year, Logan McDonald, is huge. 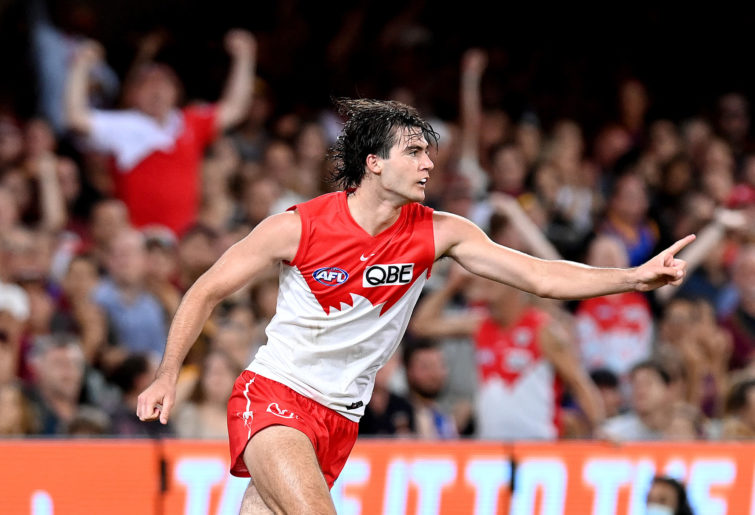 Luke Parker and Jake Lloyd have another five or so years until retirement and will be a key cog in this wheel – years that should be long enough to secure that next premiership medallion.

A lot will depend how these cygnets develop and in what timeframe, along with the teams around them. Sydney will need some pre-emptive recruiting to provide support to the group as their window shifts from ajar to well and truly open.

This is not unlike Richmond’s trading bringing in Toby Nankervis (sorry, Swannies), Dion Prestia, Josh Caddy and Tom Lynch (not sorry, Suns).

The Tigers’ dynasty wouldn’t have occurred without these role players. In fact, Nankervis was irreplaceable and it’s evidenced this year. Time will tell if Tom Hickey and Callum Sinclair need a hand in future seasons.

The Swans’ recruiting and list management has always been top notch, and their age distribution and player ability is going to hold them in very good stead.

Their average player age is 24.05 and the average games experience is 49. The Western Bulldogs and Melbourne have similar statistics as top-four sides, obviously better placed for this season on-field. However, you can see the difference when comparing to a team such as Essendon (23.46 years and 40 games).

Sydney’s run home is difficult to read due to the COVID-19 scenario in their home town. However, a smashing win on the road to West Coast last weekend provides no cause for alarm.

After the Bulldogs this weekend, they have four remaining matches against only one other top-eight team, so they’ll look to consolidate their sixth position.

It will be a year to experience finals for the young Swans and see how they match up, ready to kick into gear in the years ahead.

The Swans have yet to hit top flight but the signs are there – for John Longmire to help them steer towards greater success.

Erin Phillips is not just a star footy player